I wasn’t expecting to teach a Comp/Rhet course this semester, or ever again actually, but I’m teaching one. Over the many years since I taught a writing course, I’ve done a good deal of writing but not much thinking about how to teach it. Now having been introduced to the new syllabus, I can see that I’ll have to make some adjustments. The English department I’m working for requires attention be paid to a host of meta-concerns, and these are the topics to be read about, taught, and discussed in class. The concept of “discourse community” is one example. We are to convey to our students how these communities are plural and how they are differentiated by the vocabulary and formal conventions in the way participants communicate. The general approach to the course was characterized for me this way: “In biology class they talk about biology. In writing class let’s talk about writing.”

I had to take a moment with that. The last time I taught writing, almost a decade ago, it seems like I was always trying to avoid talking about writing. Rather I was trying to get students so interested in something other than writing that they would then be compelled to resort to writing in order to satisfy that interest. I took a moment with the alternate approach, but just a moment. My indirect approach of long ago didn’t automatically produce stellar writers, not by a long shot. I’m open to trying something different.

I’m intrigued, too, by the institutional goals that this writing syllabus reflects. We serve an urban population of diverse students, many of whom are the first in their families to attend university. Students like this can be hard to retain not only because a university environment is alien to them, but because there are so many other conditions, material and cultural, stacked up against their staying in. One writing project on the syllabus requires students to enter into a discourse community “to which they do not belong” and to produce a piece of writing that adheres to its rhetorical conventions. For many of these students, academia itself is foremost among the alien discourse communities that they are being encouraged to join. It’s also one that, let’s face it, may hold little appeal to students in our current cultural climate, where the utility of education beyond vocational training is suspect. It’s also one that joining may feel to them — with regard to the members of the non-academic discourse communities to which they presently belong — something like a betrayal. In the street sense of the term, the academy isn’t a place that’s quite “real.”

Pondering these concepts and plotting out how to apply and shape them into a day-to-day course of study, I kept thinking of a scene from one of my favorite movies, The Big Night. It is a film about two Italian immigrants, restaurateurs who are struggling to succeed in one of the boroughs of New York. One brother, Secondo, is eager to change his life, to seize the opportunity and to rise economically. The other brother, Primo, is an artist of the fine cuisine that has been passed down to him over generations. Like fine art, it’s the sort of food that the common American has to acquire a taste for, and so their little restaurant is barely hanging on. Secondo loves his brother, but wants him to loosen up his standards a little. Primo wants to conserve and protect those standards.

In particular, the scene I had in mind is the climactic one. On the corner down the street is another restaurant, a wildly successful one, owned by another immigrant. This older man, Pascal, has been there longer than the brothers. Pascal serves his vulgar American customers heaping bowls of spaghetti and meatballs and envelops them in a dolce vita party atmosphere. His food is not in the same class as Primo’s. But Pascal is more a salesmen than he is a chef, and he’s selling himself, his winning personality. Primo despises Pascal: “He should be in prison for the food he serves.” Secondo agrees with his brother in principle, but also admires Pascal’s success, and this mixture of disdain and envy finds expression in the affair Secondo is having with Pascal’s wife. All of this comes to a head at the end in a confrontation between Secondo and Pascal. My brother is a great artist, Secondo says to Pascal, and in comparison, “You are nothing.” Pascal, with some dignity, responds, “I am a business man. I am whatever I need to be whenever I need to be it.”

The movie wants us to see Pascal as the villain, mostly, but I wondered if he might be seen as a hero, an artist himself, an artist of fluidity. He may be shallow, but he’s not afraid of change. He’s not afraid of entering into any number of situations – any number of discourse communities, if you will — and making the best of the (economic) opportunities they afford. He’s not like Primo, a delicate orchid, beautiful but dependent upon a specialized environment; he’s a weed, tough and ugly, capable of flourishing anywhere. Doesn’t change does require this sort of experimentation with fluidity, a loosening up of things that were fixed, especially when you are learning a language, and especially in the competitive atmosphere of the market? And isn’t education – when it really happens – a process of change? Our job wasn’t to train our students to be delicate flowers capable of blooming only in in protected environments but to be bold, brave, wide-ranging weeds.

I didn’t like the way this metaphor was going. The flower/weed comparison put me too much in mind of “creative destruction” and “disruptive innovation,” concepts championed by the meta-Pascals whose job is selling the salesmen.

In his recent book, A Foot in the River, Felipe Fernandez-Armesto argues that what makes humankind differ from the animals is not, as has often been assumed, culture. We know now that many animals are cultural, too, which is to say, they pass down information and behavior in extra-genetic ways. They teach, they learn; it isn’t all instinct. Rather, what makes humankind distinct, says Fernandez-Armesto, is its degree of cultural divergence, which is vast compared to any other species. In fact, human societies suffer from a sort of acceleration of cultural divergence. One consequence, I suppose, is that we will have many jobs in our lives; we must be continual learners of new languages, new discourses; ever mobile, ever flexible, never devoted to any particular locale, or to any particular anything, at least not for long. This is the future that today’s post-secondary educators are told to prepare their students for: the mad race to outrun the systems of automation that are coming to take our means of livelihood. The design of the writing class aligned with that directive.

If this is what makes us human, is it anything to celebrate? I doubt someone like Wendell Berry would think so. His overarching theme is that of affectionate devotion to one practice, one art, and to the kind of learning that can only come from the inherited stewardship of a particular piece of land. This would require, Fernandez-Armesto’s argument seems to suggest, a willed remoteness. Those most long-lasting, which is to say, most durable of human societies are not those Eurasian societies that have risen and fallen over thousands of years but,  Fernandez-Armesto points out, “the San or Bushmen of Africa, the Australian aboriginals” or some “rarely encountered forest peoples” (222). Exposure to cultural diversity drives further cultural divergence, and if a society lacks that runaway divergence, it is a consequence of being so far off the beaten track. The accelerating condition that we are so familiar with may be accounted for, finally, by natural history, to the fact that there are so many more of us than ever before and to the fact, in turn, that our exposure to each other is ever greater. Natural history, the multiplication of human beings on the face of the earth — these are matters that have long given thoughtful people grave pause over long-term human prospects. I think of the film Koyaanisqatsi and how its time-lapse camera techniques so chillingly captured this mad acceleration and made it seem like some kind of spreading disease. Near its finale is a sequence of what appears to be a slow-motion explosion that never quite comes to an end.

The chilled feeling is familiar to the ecologically aware. “The pace precipitates panic,” as Fernandez-Armesto put it. Fear and panic ward us off from pondering matters of environmental crisis and has inspired a multitude of dystopian books and films. Fernandez-Armesto, with a few others at Oxford in the early seventies, were pioneers in what is today called environmental history – “historical ecology,” they called it  — but Fernandez-Armesto himself doesn’t share in the assumption of decline and decay that so often accompanies ecological consciousness. Durability – we might say, sustainability – should not be our measure of success, he writes in another book. Better to take part in “a sort of cosmic binge – a daring self-indulgence of the urge to civilize.” Success is measured, in other words, by civilization itself, defined as what can be shaped and constructed out of our continuous struggle against nature. Why make some homeostatic harmony with nature our ideal when “it will all surely perish anyway” (Civilizations, 34)?

I suppose it will if we behave as if it will. 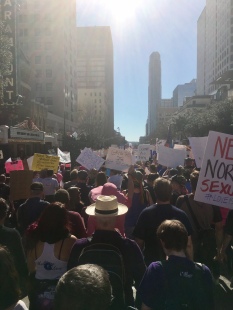 I strayed too far. I let my associations get the better of me. This may have something to do with the times. “What can we do?” my 13-year-old daughter asked, anxious about the outcome of the late election, and the actions taken by the incoming administration during its first week. We can improve our minds, I thought to answer. We can read serious books, old ones, new ones. Train ourselves to engage in the conversations of serious learned people. We can study languages. Chinese, yes, but why not also Latin and ancient Greek? This course of study, the humanities – not engineering — may be the best preparation for a future whose threats to stability are accelerating and largely unknown.

That’s not easy, of course. This is a mode of resistance, resistance to the general flow. It came to me that here is where the two ends of the Primo-Pascal spectrum meet. Acquiring a taste for Primo’s fine food requires that flexibility that learning requires, and the result is to become something new, an aficionado of fine cuisine. This conclusion seems facile, too pat. But convincing students not to be afraid of the change that real learning will result in seems half the battle sometimes. I know that because I know how I have avoided change and because I know how learning has changed me.