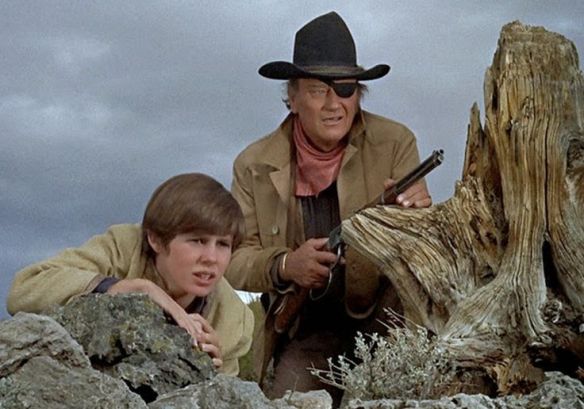 By 1968 John Wayne was as politically polarizing a figure as he would probably ever be. In June of that year, he released his Vietnam movie, The Green Berets. He was a vocal supporter of the war, and the film had been made with the full cooperation of the Department of Defense. It presented the US mission in Vietnam as a stand for freedom and justice and blamed America’s difficulties there on a sapping of nerve perpetrated by an unpatriotic press corps. That message might have played less divisively a year earlier, before the Tet Offensive, before Lyndon Johnson’s announcement he would not run again. Screenings drew antiwar protests; reviewers pilloried the film. “The Green Berets became the focus of a divided America,” writes J. Hoberman in The Dream Life: Movies, Media, and the Mythology of the Sixties. “LBJ’s abdication left Wayne the lone authority figure standing.”

Nineteen sixty-eight was also the year Charles Portis’s novel, True Grit, was serialized in the Saturday Evening Post and then released in book form. A movie version came out the following year, starring John Wayne in the role of Rooster Cogburn. As Rooster, Wayne projected no less self-regard than he had as the super-competent, fighting Marine Colonel he’d played in The Green Berets. In other ways, however, Wayne in the Rooster Cogburn role was somewhat reduced: fat, drunk, and with an eye-patch. Wayne embraced the role, was embraced in it, and it came to represent the last phase of his career.

One can’t talk about True Grit in its times without talking about John Wayne, but it’s in the manner of clearing brush from the path. Wayne’s cultural and professional stature shaped the film, focused the story on himself, and thus shaped the way people understood it, especially if they never got around to reading the book. So we need to move Wayne and the film out of the way. True Grit the novel isn’t Rooster Cogburn’s story. It belongs to its narrator, Mattie Ross. 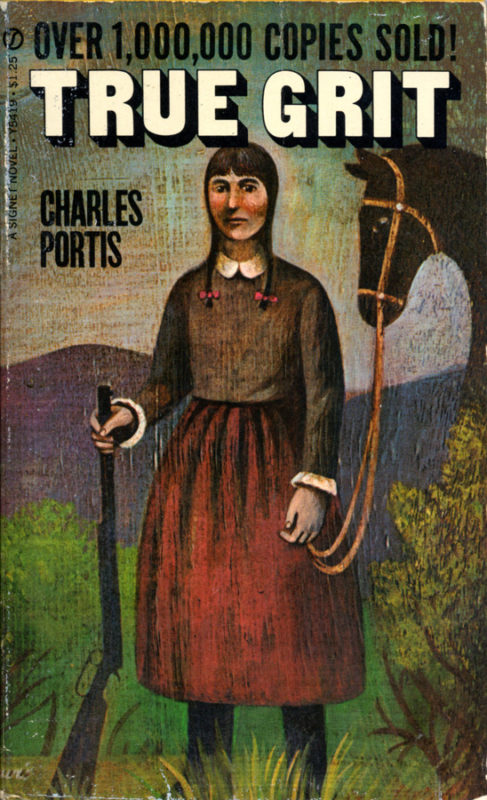 “I was just fourteen years old,” goes the novel’s second sentence, “when a coward going by the name of Tom Chaney shot my father down in the street in Fort Smith, Arkansas and robbed him of his life and his horse and $150 in cash money plus two California gold pieces that he carried in his trouser band.” The year is never named, but a history buff with basic math skills can figure it out—1878. Fifty years have passed since the murder, Hoover has been elected president, and a fully grown Mattie is looking back on how, at fourteen, she hired a U.S. marshal (Rooster) to track the killer into Indian territory, to catch him and exact her revenge. Her supreme confidence in the righteousness of her cause burns even brighter than does Wayne’s and his cohort for the cause in Vietnam. Mattie’s mission, too, is one of justice in the territory, as it were.

It may seem absurd to read True Grit as a Vietnam novel. Certainly none of the reviewers blurbed on my copy of the 1969 paperback made that association. They didn’t see the book as divisive, in the way so many events and other cultural items of the period, such as The Green Berets, were divisive. On the contrary, True Grit “should be enjoyed by people of all ages” said the Cleveland Plain Dealer; it was a pleasure “regardless of age, sex, class, color or country of origin” (Newsday); it spoke “to every American who can read” (The Washington Post). If Vietnam and everything else was dividing Americans, here was a book that could bring them together. That commentary itself is a commentary on the times.

Even so, if we broaden the focus a little, we can find a more significant connection in the book’s themes. Explanations for the Vietnam War and other of the United States’ brutal foreign adventures are typically found in a complex of ideas—religious, philosophical, political, economic. According to these ideas, not only providence but a certain economic ruthlessness entitle America to assert its will. So it is with Mattie Ross, with her cause and with her character. In this way, True Grit can be credibly read as a critique of American Exceptionalism at the very time when American Exceptionalism was under a bright lamp of interrogation.

A friend once read the novel on my recommendation and half-dismissed it as mere fable. He couldn’t get past the fact that a fourteen-year-old girl would be permitted along on the hunt. “That would never happen,” he said. But to reject this plot point is to underappreciate who Mattie is. She bullies Rooster into taking her with him, just as she bullies everyone who gets in her way. A good deal of the book’s humor comes from the fact that Mattie doesn’t realize what an insufferable hard-ass she is. Rather, she sees her way as the way of things, which she constantly justifies, sometimes with platitudes of the Protestant work ethic, sometimes outright with verses of scripture, but mostly with the logic of the market.

“When I have bought and paid for something I will have my way,” Mattie tells Rooster. “Why do you think I am paying you if not to have my way?”

The authority of money and the authority of scripture: Max Weber made that connection a long time ago in The Protestant Ethic and the Spirit of Capitalism. For a more contemporary take, I read William E. Connolly’s 2010 essay, “The Evangelical-Capitalist Resonance Machine.” There Connolly describes a self-perpetuating “assemblage” of “cowboy marketeers” and Left Behind series enthusiasts. What energizes this assemblage, he wants to know, what makes it so angry and so drawn to retributional violence? Connolly attributes these characteristics to the displaced venting of existential resentment. The Capitalist resents the future, that it requires a check on present-day greed; the Evangelical resents those whose alternative faiths saddle their own with uncertainty. These anxieties reverberate, their “electrical charges resonate back and forth,” so that

its participants identify similar targets of hatred and marginalization, such as gay marriage, women who seek equal status in work, family and business; secularists, atheists, devotees of Islamic faith, and African American residents of the inner city who do not appreciate the abstract beauty of cowboy capitalism.

Evidence of what Connolly was talking about can be found in our current president’s obsession with strength and his eagerness to express it through cruelty. A certain segment of the population was looking for someone to deal with immigrants, uppity women, and people of color as John Wayne would a desperado in the territory. They were looking, as Mattie was, for someone with grit, so as not to dilute with mercy the righteousness of their revenge. 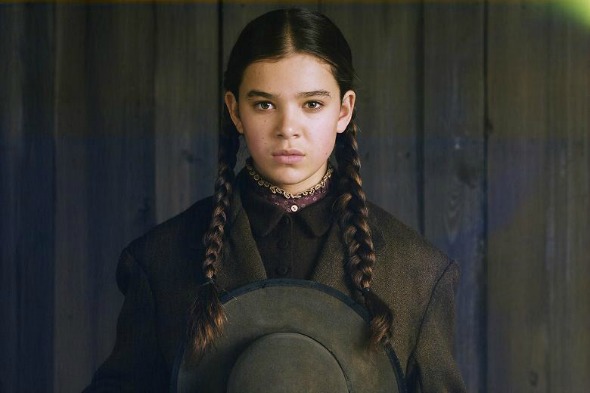 Hailee Steinfeld as Mattie Ross in the 2010 film version of True Grit.

But these are harsh readings of Portis’s novel and probably not the best ones. They fit better other fictional characters we’ve come to know: Captain Ahab, Noah Cross from Chinatown, Mr. Potter from It’s a Wonderful Life, Daniel Plainview of There Will Be Blood. We despise these characters, and rightly so. In contrast, Mattie Ross has our sympathy and even our affection. The “I will have my way” line quoted above comes during a contentious argument over whether she and Rooster will join forces with the Texas Ranger who is also tracking Tom Chaney for another crime, and whether Chaney will be taken alive. Mattie is adamant, insisting on exactly the revenge that she’s paying for. “You are young,” Rooster tells her. “It is time you learned you cannot have your way in every little particular. Other people have got their interests.” Mattie reports this dialogue but pays it no heed. The reader chuckles. Rooster’s assessment is very accurate, indeed.

Both film versions of True Grit have much to recommend them. Neither do justice to the book. Neither finds it possible to dramatize Portis’s heart-breaking handful of final paragraphs. This is where the reader grasps the true price Mattie paid for her revenge, and that it was bigger than the one she reckoned. Now in her sixties, she’s a rich and powerful businesswoman, a personage in her community, with a finger in many pies. She’s also bitter and loveless, a character people fear but make fun of behind her back.

They say I love nothing but money and the Presbyterian Church and that is why I never married. They think everybody is dying to get married. It is true that I love my church and my bank. What is wrong with that?

To answer Mattie’s question, nothing is wrong with that, not on the face of it. But again, in these final paragraphs, Mattie reveals something she doesn’t herself see. She never learned what she needed to learn about other people’s interests, and that makes Portis’s great comic novel a great American tragedy.

This essay also appears at the Society for US Intellectual History Blog.