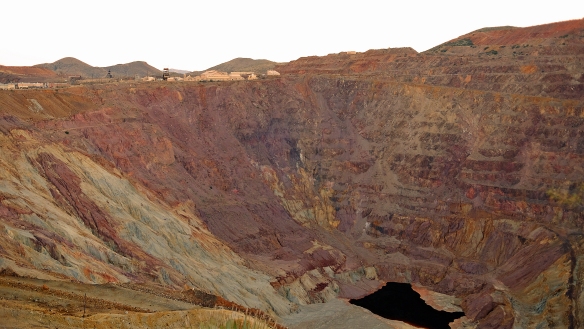 Driving into Bisbee, Arizona, last month, the first thing we saw was the old quarry. Coming in from the east, just before reaching Old Bisbee, you could pull into a lot, park, and peer through a chain-link fence into the enormous, red pit below. Earth-moving machines had raked and scalloped its walls. At the bottom was a pool of worrisome liquid, thick and red as–well, I’m not just being dramatic—it really looked like blood.

Bisbee was founded in 1880, a boom town near the border, where copper was mined. Like Butte, Montana, Bisbee is representative of industrial practice in the West in the decades after the Civil War. As the historian T. H. Watkins says in Stephen Ives’ documentary series, The West, “The mining industry, probably more than any other single industry, was designed specifically to get into the West, find what resources it had, dig them out, leave a wreck behind, get out, and move on someplace else.” 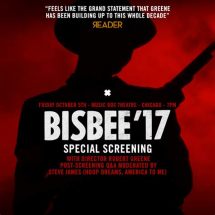 Not all had moved on. The mine closed in 1975, and Bisbee has survived as a small, remote high desert town. The historic district seems to have resurrected itself as an artist colony and bohemian enclave, with make-do homes up the mountain side, vintage hotels, funky shops, galleries, and sites of tourism. It’s no ghost town, but it does seem to have a fascination with the ghosts of its past. Some of these ghosts may be the disappeared, the 1200 striking miners of 1917—mostly Mexican and Eastern European–who were gathered at gunpoint, packed into cattle cars, hauled off into the desert, and abandoned. Last year’s film, Bisbee ’17, part documentary, part reenactment, tells this story.

I thought about Bisbee, and the Watkins quote, when a week or so later, I watched the Coen brothers’ new film, The Ballad of Buster Scruggs. The Scruggs story is only the first of six separate narratives, taken from an imagined book of Western tales. The segment that made me think of Bisbee was the one with Tom Waits, called “All Gold Canyon.” It begins with scenes of an idyllic canyon glade, glowing in the sun, where flora and fauna go about their days in perfect homeostasis. Balance is disturbed by the arrival of an old prospector, played by Waits. He pauses in the stream to do a little panning and discovers a few specks of gold. Intrigued, he conducts a series of experiments, digging holes, panning the dirt, eyeing the specks, calculating. With slow deliberation, he is systematically determining the best spot to dig in earnest. Soon the glade has a pock-marked patch, as if diseased. 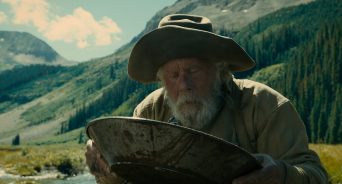 Tom Waits as the prospector in The Ballad of Buster Scruggs.

Much environmental philosophy stresses the need to be in relations with the world outside us, rather than to see it as dead matter to exploit as we wish. The old prospector does speak to “Mr. Pocket,” the vein of gold he is hunting, as if it were a living intelligence. I’m going to find you, Mr. Pocket. Sooner or later, I’ll track you down. The trust he places in his science proves sound. Eventually, he locates Mr. Pocket and reacts with a burst of maniacal laughter.

The idea of a lone prospector, talking to himself amidst the vastness of the American West, serves myth more than it does history. According to Ives’ The West, the westerners of the second half of the nineteenth century and after “were rugged individualists chiefly in their dreams. In real life they were likely to draw paychecks for digging in corporate mines, plowing corporate fields, or chasing corporate cattle.” This myth continues to support Western libertarianism, which tends to ignore the massive corporate and federal expenditures that have made collective living there viable.

Not that miners themselves aren’t rugged, tough individuals. Industrial mining requires brute strength and quick wits. It isn’t at all abstract. The point is to extract the ore; you can see it, you can weigh it, and you’re paid accordingly. One can appreciate how a miner would take pride in the job and be hesitant to give it up for paper pushing or the service industry.

These are the impressions I gathered, anyway, from the ancient miner who gave the Queen Copper Mine Tour in Bisbee. Leading us into the tunnels on rail cars, he told of how he’d gone into the mine right out of high school and stayed on through the years to its closing. Although he talked some about the history of the mind before his time and supplied some historical information, he didn’t mention the 1917 incident. Rather, he seemed to most want us to know what good money he’d made when he worked there, a base salary with a bonus tied to production. If I understood him correctly, he was pulling down well over a thousand a week, and that was in 1960s money.

He acknowledged the many dangers involved in the work but mostly to joke about it. Danger is best met with good humor. This stoicism in the face of hardship and death—long celebrated in Western myth –is one of the threads that ties the six stories of Buster Scruggs together. At times this stoicism is cheerful to the point of absurdity. Characters find themselves in dire straits: the savages are attacking, there’s a noose around your neck, a faster gun appears on the far end of Main Street. When conditions are boiled down to first principles, these heroes don’t flinch. Not only do they not flinch, they seem to lack the very capacity to flinch.

How do these myths function? On one level, the heroes are celebrated. On another, the principles are reinforced. Nature is red in tooth and claw; only the strong survive. If we didn’t manfully accept that fundamental reality, if we hid behind feminine sentimentality or “a pretense of humanitarianism,” as Theodore Roosevelt argued in his speech, “The Strenuous Life,” we might as well “leave the Apaches of Arizona to work out their own salvation.” Myths about the fundamental nature of reality have been used to justify all manner of deeds and behaviors.

To get to Bisbee, we made the long drive to El Paso and then west along the border on I-10. The highway was abundant with border patrol vehicles. We passed through check points, saw officers operating sensors on poles. We saw the tent city outside Tornillo. The president was on the radio, arguing for his border wall, and threatening to shut down the government. It isn’t that he’s against immigration. He’s in favor of “merit” immigration, he explained. If you don’t have something valuable to trade, we have nothing for you, in other words.

It’s a policy that regards humanitarianism as a pretense, either to gain political advantage or to protect the weak from the brute fact that deep down, we’re all predators seeking the upper hand.

I thought about this policy of merit immigration when I watched another of the Western stories from the Coen brothers’ movie. This one, titled “Meal Ticket,” features an orator, a young man without arms and legs, whose impresario/handler takes him from town to town in a carny wagon. The orator specializes in Shakespeare’s sonnets, the Gettysburg Address, and the Cain and Abel story from the Bible. “Am I my brother’s keeper?” Or is my brother a resource, from whom, through sharp dealing, I might extract a measure of gold? The films of the Coen brothers are often described as ironic, darkly comic, and misanthropic. Now critical seems a more apt word.

A version of this essay appears at The Society for US Intellectual History Blog.