In connection to my ongoing research into systems thinking and ecological thought from the perspective of cultural and intellectual history, I read a lot of Arthur Koestler this summer. I read some about him, too. Koestler’s prose was good company. He had a gift for writing about ideas. I’m not sure I would have enjoyed spending much time with him in person. 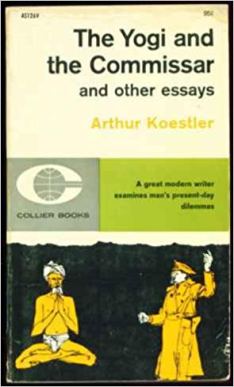 One essay I returned to more than once was “The Yogi and the Commissar” from 1942. It’s a good example of Koestler’s ability to capture concepts in figurative language. He begins by imagining a device able to break down the spectrum of “all possible human attitudes to life” into bands of light—a “sociological spectroscope,” he calls it. At one extreme end is the infra-red, represented in Koestler’s scheme by the Commissar. The Commissar is the ideologue, willing to take bold action, including “violence, ruse, treachery, and poison,” to achieve the goals his doctrine prescribes. Representing the opposite ultra-violet end of the spectrum is the Yogi. The Yogi’s highest value is his spiritual attachment to “an invisible navel cord” through which he is nourished by “the all-one.” The Yogi “believes that nothing can be improved by exterior organization and everything by the individual effort from within.”

I attempted to describe a similar change-from-without/change-from-within confrontation between radicals in the late sixties in my book, Runaway: Gregory Bateson, the Double Bind, and the Rise of Ecological Consciousness. For illustration, I relied on Marat/Sade, Peter Weiss’s play of the period, but found many other contemporary attempts to express a similar argument. I’m almost certain I’d read “The Yogi and the Commissar” at some previous point, but by the time I got around to writing, I must have forgotten about it. How hard I worked to keep those sections light and swiftly moving! Koestler’s writing seems so effortless on the page that I can only shake my head in admiration.

If reading Koestler was easy, I was often made uneasy reading about him. Face to face, he could be competitive and overbearing. Sidney Hook said Koestler “could recite the truths of the multiplication table” in a way that made people angry. Then there was his treatment of women. Koestler was known for his “crude advances” and a “predatory belief that coercion added spice to sexual intercourse.” At least one woman accused him of rape. Certainly, Koestler had several long-term relationships, but he tended to organize the energies of the women who loved him in secretarial work to advance his literary cause. In his seventies, suffering from Parkinson’s and leukemia, Koestler committed suicide, and was joined in the act by his third wife Cynthia, who was healthy and fifty-five.

To sum up: When we turn Koestler’s spectroscope on his own sexual relations, we get a strong reading of infra-red. His ends justified his means, as they do for the Commissar.

The above impressions, as well as the quotes, are drawn from my reading of Michael Scammell’s 2009 biography. Scammell tells a good story, too. As for the rape charge, he doesn’t simply accept it at face value. He tries to place it in context; he airs a number of considerations. For instance: Koestler’s accuser did not speak immediately about the assault but waited for many decades to pass. She “seemed to have responded by pushing the incident to the back of her mind and accommodating herself to it.” Perhaps what Koestler did wouldn’t have been called rape then, Scammell suggests, but has only been described that way more recently. Koestler made no mention of the incident in his diary, though his diary was the place he regularly listed conquests. On the other hand, Koestler was drinking a good deal during this period, so it’s possible “he was so drunk he forgot all about it.” These considerations, read in light of the Kavanaugh scandal, land like punches to the gut.

In his 1942 essay, Koestler denied any smooth blending somewhere in between the ultra-violet Yogi and the infra-red Commissar. “Apparently the two elements do not mix”; all that “has been achieved so far are various forms of motley compromise.” Two decades later, however, when he brought his intellectual concerns to the sciences and to metaphysics, Koestler allowed himself to imagine a less motley merger. This becomes explicit in The Ghost in the Machine (1968), the last book of a trilogy that includes The Sleepwalkers (1959) and The Act of Creation (1964). Applied not merely to human behavior but to the nature of things in general, the attitudes of the Yogi and the Commissar become opposing “tendencies” or “potentials,” one integrative and the other self-assertive. At certain levels of systemic organization, where entities function as both part and whole, the integrative and the self-assertive occupy the same space, embroiled in “dynamic equilibrium.” Koestler belongs in a tradition of thinkers who sought a grounding for individual and public morality in a synthesis of nature and culture and who strived to describe the living world as a moral environment where the choices of individuals make a difference. 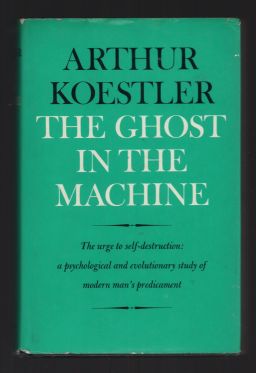 A passage comes in The Ghost in the Machine where Koestler raises “the moral dilemma of judging others.” He has developed an argument in which “the self-assertive, hunger-rage-fear-rape” emotions constrict “freedom of choice.” The loss of freedom in Commissar-like behaviors involve “the subjective feeling of acting under a compulsion.” “How am I to know,” Koestler asks, “whether or to what extent [a person’s] responsibility was diminished when he acted as he did, and whether he could ‘help it’?”

Was he thinking his own behavior here? And if so, was it merely an excuse, a self-serving dodge, or did it have an element of truth?

In Ronan Farrow’s reporting–a year ago, now–we find indications of compulsion in the actions of Harvey Weinstein. After one of his victims went to the police and subsequently wore a wire, Weinstein’s behaviors subsided, a former employee explained. “But he couldn’t help it,” she went on to say. “A few months later, he was back at it.” Donald Trump, too, is often described as having no impulse control. These men see themselves as absolute sovereigns of their worlds; they have severed “the invisible navel cord,” their connection to a larger relevance; they have ignored the pushbacks in their environment for so long that it’s now a habit they can’t break. The paradoxical outcome is a lack of control. Thenceforth, they can’t help but be destructive and vile.

As for “the moral dilemma of judging others,” I understand Koestler’s question, but I’m not sure it’s a useful one. Taking a systems perspective blurs boundaries, including those between self and environment, between us and them, between victim and victimizer, but it doesn’t follow that matters of justice be abandoned or that victimizers be let off the hook. Given time, I suppose, individual cases can be contemplated with scholarly dispassion, as Michael Scammell did with Koestler himself. As for now, it would probably be safer for everyone that the power addict’s power be removed.

A version of this post was published at the Society for US Intellectual History Blog.