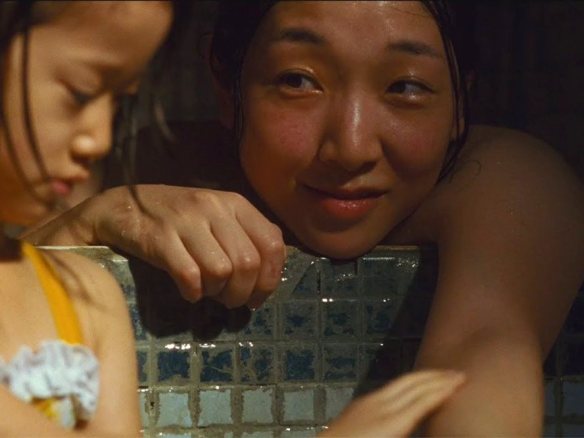 Playing out today, as everyone wonders what life will be like on the other side of the pandemic, is some version of the perennial conflict between radicalism and reform. Some are asking when we’ll get back to normal; some speculate about how “the new normal” will be; others claim that normal was the problem to begin with, and that what we want is something wholly different.

In my last post I used the phrase, “the literature of transformation,” which seemed warranted when I thought about my reading these past two years. But I picked up the phrase from an article by someone whose reading in this literature has been much more thorough and systematic than my own. That article, titled, “Degrowth: A metamorphosis in being,” by Pasi Heikkurinen, of the School of Earth and Environment at the University of Leeds, was published last year in Environmental Planning E: Nature and Space.

Heikkurinen points out that, in much of the literature of transformation, there is a “lack of rigor” regarding the concept itself, and, quoting another researcher, that “analytical clarity is often superseded by visionary and strategic orientations” (529). Transformation as a concept is under-analyzed and undertheorized, and Heikkurinen sets out to help rectify that situation. The degrowth community has an active research agenda. They’re turning over all the stones. 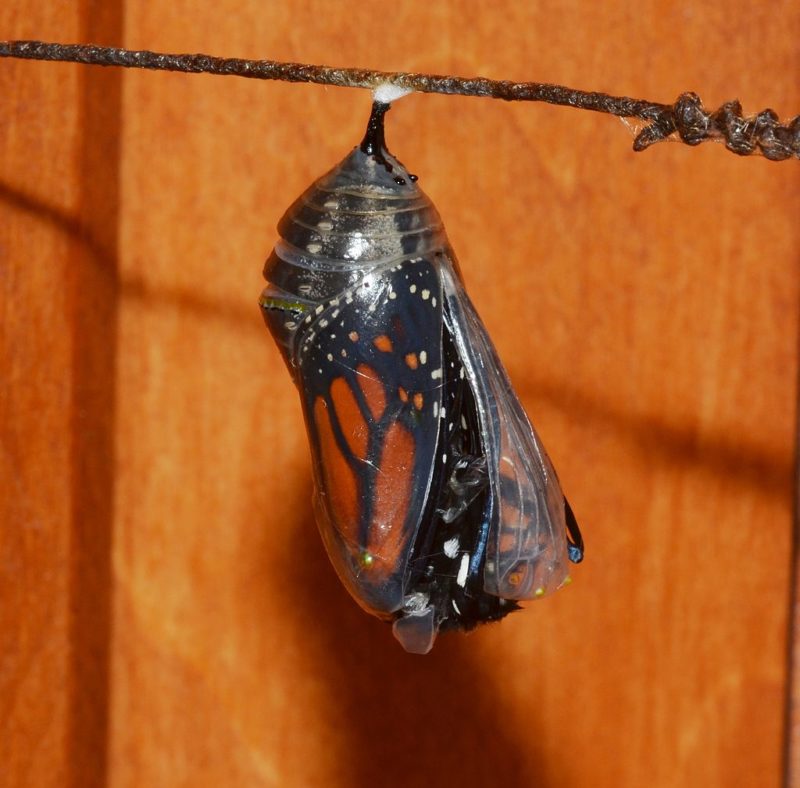 Monarch Butterfly emerges from chrysalis (found in backyard on 10/17/14). Photo by Andy Reago and Chrissy McClarren.

One thing that his analysis argues is that transformation can be looked at in two ways: ontically and ontologically. Ontic transformation occurs in “the social and political realm.” Ontological transformation concerns “the realm of being.” If I understand his distinction, the conflict between reform and radicalism has to do with transformation perhaps wholly in the ontic realm. The socio-political is organized to transform matter, energy, and life to human purposes. Radicals and reformers mostly agree that this organization itself requires transformation but disagree on how much transformation is required and how it is to be carried out.

Analysis of transformation in the ontological realm uncovers in humans a “will to transform.” To transform the world–to make it a better place–is “an unequivocally stated value axiom,” Heikkurinen writes. It’s the “main objective of responsible human activity.” The words improved, developed, and responsible signify value, but the will to transform as an expression of ethics is almost beside the point. Humans have “an inherent drive” to “endlessly craft and reorder the world.” Whether aimed at selfless improvement or self-interested greed, “constant transformation is needed, and stillness is not an option” (535).

In 1967, in London, the atmosphere of the Congress on the Dialectics of Liberation was heavy with the conflict between radicalism and reform. Urgency for intervention was at a fever pitch and militancy felt ascendant. This conflict overshadowed the original intent of the gathering, which had been conceived a year earlier by a group of phenomenologists associated with the radical psychologist R. D. Laing. Because the anthropologist and systems theorist Gregory Bateson was one of Laing’s mentors, Bateson was the Congress’s first headliner. Bateson later refined his lecture and published it under the title, “Conscious Purpose versus Nature.” By fixating on data that led them in a line toward the achievement of purpose, human beings were “blinded” to their own “systemic nature,” the loop structures in which they were embedded.[1]

Grasping the tenor of the moment, Bateson offered a path beyond the radicalism/reform face-off. His words were meant to move his audience–to put it in Heikkurinen’s terms–from an ontic to an ontological orientation. Today we call that orientation “ecological.” Some call it the systems view.

As a systems theorist, Bateson also had a lot of say about logical typing, and following that thread, I want to see the relationship between the ontic and the ontological as a member/class relationship. Every intervention in the ontic realm has thermodynamic, ontic realm consequences–an increase in entropy. But no intervention in the ontic realm can affect the ontological realm. In cybernetic terms, no change in the temperature of the house can change the thermostat’s threshold setting.

Heikkurinen turns for an alternative to a form of “Heideggerian mindfulness” called “releasement.” Heidegger had borrowed the term from Meister Eckhart. Releasement is a way of being that lets go of the will to transform, that lets go and “waits.” It is “calm, self-possessed surrender to that which is worthy questioning” (540-41). This thinking had come during a time, according to Hannah Arendt, when Heidegger was trying to come to terms with his involvement in the Nazi movement (536-37). With this detail, one must pause to acknowledge that any talk of existential transformation as a solution to social crisis can be reasonably viewed as fundamentally reactionary. Michael E. Zimmerman takes up this issue in Contesting Earth’s Future: Radical Ecology and Postmodernity (1994), a book Heikkurinen draws on for his piece.

Having noted those matters, I’ll move on to sum up. Because every transformation pays a thermodynamic price in increased entropy–even those transformations meant to reduce matter-energetic throughput–“a proper response to the call for transformations would involve following the example of releasers, who allow being to unfold without constant anthropogenic intervention.” Thus the releasers are a symbol of hope. They are “already living the metamorphosis” (539).

Who are the releasers? This is the question reading Heikkurinen’s article made me ask.

Works of fiction may be my only vista into imagining who the releasers might be. It’s been months since I saw the movie, Shoplifters, Hirokazu Kore-eda’s Palm D’or-winning film of 2018, but I keep thinking about it. It’s the story of a multi-generational, make-shift family living in some forgotten corner of the urban landscape. They survive on the minuscule, unreliable salary of one parent and what they can pilfer from local shops or scavenge from their surroundings. Like another fairly recent film, The Florida Project (2017), and last year’s celebrated Parasite, Shoplifters focuses on economic inequality, on families struggling with poverty, though through a different lens.

The economic inequality depicted in The Florida Project and Paraside is a technical matter: Material resources and education have been unfairly distributed. In the world of abundance we have built, some have been left behind. The families in these films live outside the abundance but they continue to live inside the imaginary, and this shapes their efforts to intervene and better their conditions. In Parasite, for instance, members encourage the marshaling of “vigor.” Vigorous intervention is the key to transforming change.

Although there are tragic lapses, the family in Shoplifters seems to exist mostly outside this capitalist imaginary. Their concerns are about the relations between them, their appreciation of each other and of life. Manners are mild, interventions are minimal. The most prominent quality surrounding them is love and care. Does the film merely romanticize poverty? Does my reading of the film romanticize poverty? That could be. But I think Kore-eda means for his audience to take in the love and care his characters exhibit without sanctifying them. When I tried to imagine what Heidegger might mean by “a calm, self-possessed surrender to that which is worth questioning,” I thought of the characters in this film.

Releasement, according to the Heidegger quotes Heikkurinen uses, involve not doing, not intervening, but “waiting.”  Releasement, Heidegger tells us, can’t be rushed; it can’t be made to happen. Rather, one waits for the call. That call might come as the collapse of civilization, which, Heikkurinen points out “has already shown itself to many.” Ah, now the article becomes uneasy-making. Some people get angry, reading things like this, and for good reason.

Many within the degrowth community themselves might bristle at this line of analysis, especially during the current environment, in which the shrinking of national GDPs is accompanied by widespread suffering and fear. Prominent degrowth voices, such as Giorgos Kallis and Jason Hickel, have taken pains to point out that virus-driven shrinkage, made worse by weak national safety nets, is not, as some assume, degrowth in practice. Degrowth is planned; it’s directed–what we are going through now isn’t. “Those who liken this economic crisis to degrowth are being deliberately obtuse,” Hickel wrote in an April tweet. “It’s like comparing a car wreck to carefully tapping the brakes. They’re not just dissimilar, they are opposites.”

Yet in a column last month in the New York Times, Hugh Roberts reiterates that solutions are not technical. That they are not only or primarily technical might be a better way to say it. Or that change must not occur only or primarily in the ontic realm. With all this in mind, I thought about the passage from Zora Neale Hurston’s classic about another community living outside the capitalist imaginary. It’s the part where the title comes from. The inhabitants of The Muck, like the family in Shoplifters, have also rejected the will to transform and instead take part in low matter-energetic activities the point of which is human interaction and joy. Of course, they live in neglected areas, and when the greater systems breakdown, they suffer in higher ratios than others do. It’s a hushed moment that this mysterious, disturbing passage describes. They are in their shanties waiting for the hurricane that will flood them out, uproot them, and kill some of them. They sit in the night in stillness and wait. “They seemed to be staring at the dark, but their eyes were watching God.”